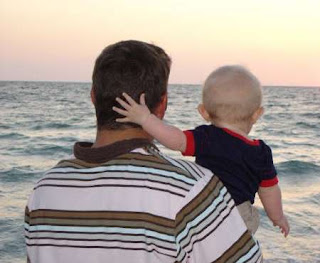 Speak to expecting fathers and you will undoubtedly find that today’s dads are far more eager to be actively involved in their children’s lives right from birth than fathers from previous generations. Yet, many of their good intentions and noble expectations seem to be quickly smothered and written off as idealistic after the baby is born.

The limelight is typically on the mother and baby during the early days and fathers often feel it would be inconsiderate or even inappropriate of them to admit that they feel like onlookers. Consequently most fathers soon find themselves in the role of “Mommy’s assistant”, as if they are second-class parents with Mommy as the expert; telling him what to do and how to do it. After all, she’s the one that spends the most time with Baby and she knows best, right?

The problem with this parenting approach is that it is so common that most people never stop to question it. Yet research shows that both the children and the family as a whole benefit when a father is given the opportunity to take on the role of an equal in the parenting arena.

Dr Kyle Pruett first encountered this gender bias and the consequences thereof when he began studying infants and toddlers raised by stay-at-home dads in stable families, where Mommy was the one with a 9 to 5 job and Daddy took care of the family and home during the day.

Almost all the fathers initially tried to mimic what they thought the mothers would do. Interestingly, they reported during interviews with Dr Pruett and his colleagues that these initial interactions with their children felt “wrong”. They said it “didn’t fit”, they “couldn’t get the rhythm”, and “relating to their children, they felt like socks that were too small”.

Sadly, in most typical families, fathers almost automatically accept this awkwardness as natural. They see this as proof that they somehow don’t possess the same level of ‘parental instincts’ as mothers do … so they lose confidence and consequently settle down in the proverbial backseat.

The fathers in Dr Pruett’s study didn’t have that option. They had to push through as the mothers were simply not available during the day to take charge. The good news is that these fathers reaped the rewards of their perseverance.

Interestingly, even in these ‘modern’ households, where the mother and father switched their traditional roles, most of the dads feared that their wives would get upset when they find out that they weren’t following their instructions to the letter, so they didn’t share their feelings with the mothers.

Nonetheless, after 1 or 2 weeks of trying to be a replacement mom, they started to experiment with doing things their own way. Before long they were secretly changing, feeding, comforting, bathing, dressing, talking and singing with, carrying, and playing in ways they thought “fit us guys better”. Even after trying their utmost for as long as they could, it was simply not possible for them to deny the fact that as men they relate to their children in a unique way.

Researchers now know that the practical differences between the ways in which mothers and fathers parent are not harmful to children, mothers, fathers or their marriages. Whether dads are fulltime caregivers or not, they naturally interact with their children differently, and at the end of the day the big and small differences between mothers and fathers all fall into place like the pieces of a big puzzle.

In his book, Partnership Parenting (Da Capo Press, 2009), Dr Pruett tells of a group of Swedish scientist that systematically reviewed 22 studies, most of which involved typical families where the fathers were the ones bringing home the bacon. Not surprisingly, they found that father engagement is linked to a higher standard of living for families with lower incomes.

They also concluded that, regardless of income, fathers that spent more time with their children had sons with fewer behavioural problems. Their daughters were psychologically healthier and getting better grades, and both the sons and daughters in these households were less likely to get involved in criminal activities.

From a practical point of view this simply means everybody wins when a father is supported in his efforts to grow into what he naturally should become for his children: a father. Nobody just automatically knows how to be a parent – not even mothers. (If in doubt, ask any mother.) The reason why mothers usually come into their own within a few weeks is simply because that is exactly what society expects of them.

Most dads believe that things will get easier as the baby gets older, but in reality fathers who don’t get the space to find their own way with their children during the early years find it more difficult to bond with their offspring later on. And the road is even more uphill when a father is not physically living with the rest of the family, especially when he, for reasons within or beyond his control, act in ways that cause him to be labelled as ‘uninvolved’ or ‘irresponsible’. A label around a father’s neck can be heavier than balls and chains on his feet.

So, before throwing another stone at unmotivated and discouraged fathers, why not first focus on building their confidence and reassuring them that they are special in their differentness. As Dr Pruett says, “Whenever fathers and children have the space to figure out who they are to each other, without mothers micromanaging the relationship, children thrive and mothers get the break they need.”