The Hidden Perils of Television Watching

Answers to the Most Pressing TV Related Questions

Why is TV bad for babies?

At what age is it safe to introduce screens?

When our child is old enough, what should we be watching?

2. At what age is it safe to introduce screens? 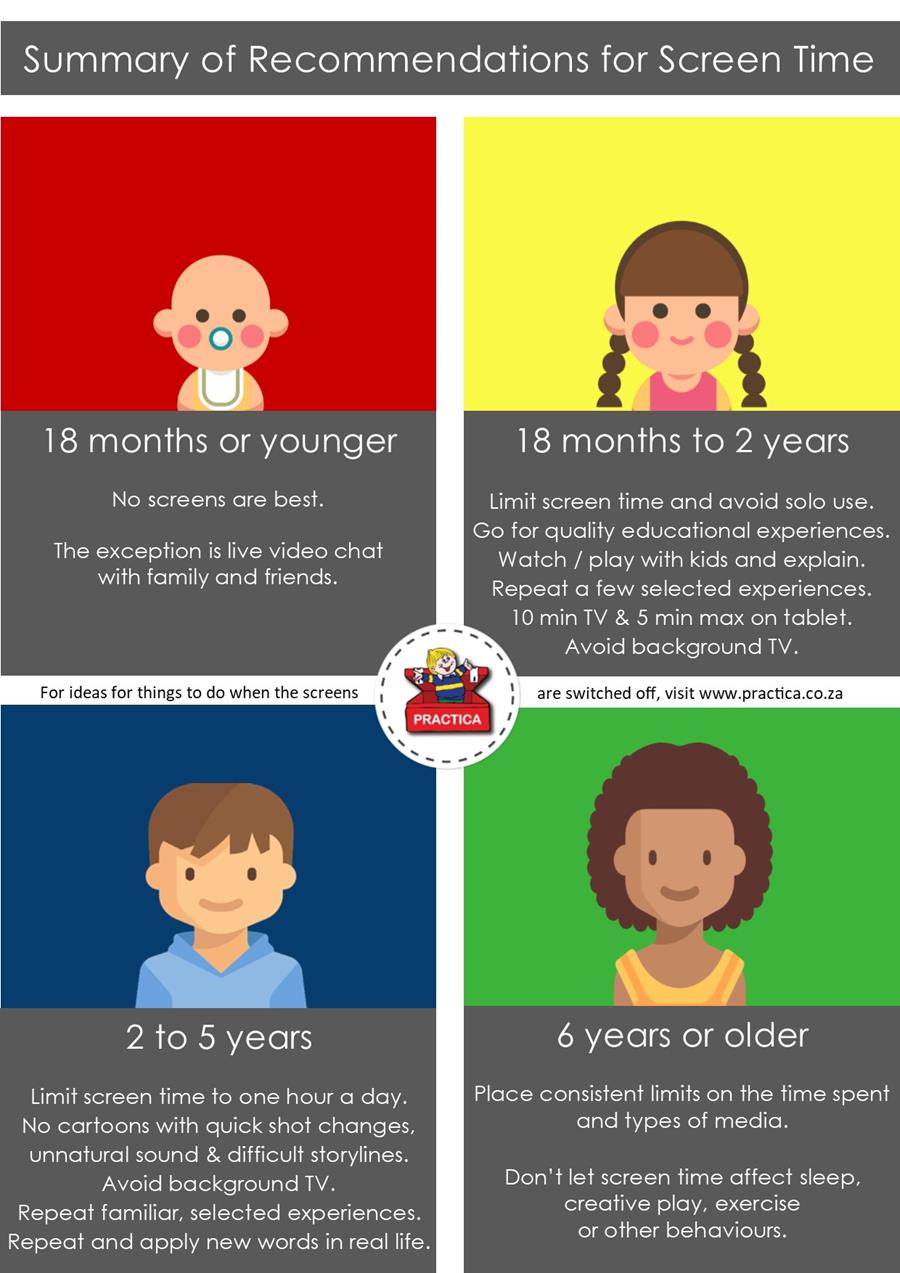 The American Academy of Pediatrics advises parents to refrain from introducing television and tablets before the age of 18 months, as depicted above.

The World Health Organization, on the other hand, recommends NO SCREEN TIME for children under 2 years of age.

1) Many parents don’t switch the television off when no one is watching. A child’s language development is directly impacted by the quality of the conversations that he or she has with interested parents and caregivers. And, researchers say that 500 to 1000 fewer words are spoken with children per hour when a television is playing in the background.

2) Most parents don’t choose the right shows and games. They don’t know how to discern whether a television program or electronic game is educational, nor whether it’s age-appropriate.

3. When our child is old enough, what should we be watching?

The worst possible choice would be “fast-paced cartoons”.

What children see and hear while watching these shows is so unlike what their brains are primed to process in real life, that they experience high energy cartoons as being simultaneously intriguing, mesmerizing and brain-numbing. 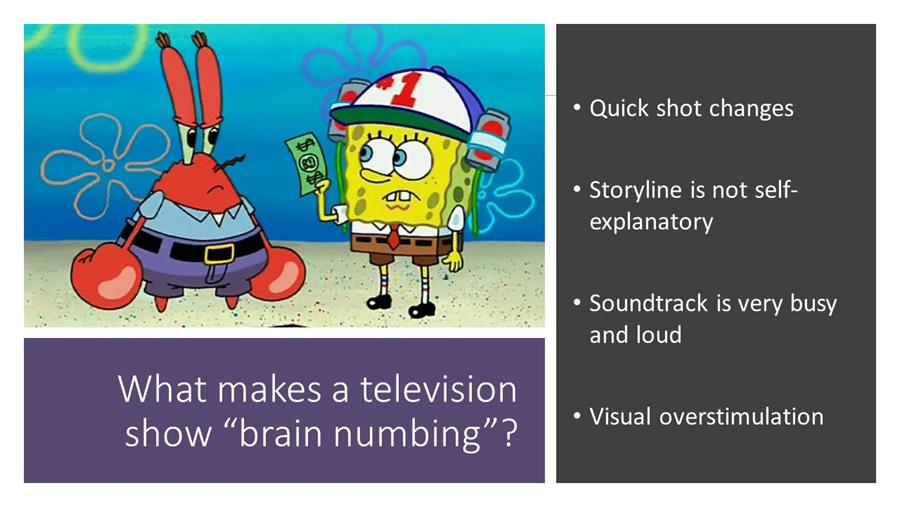 Watch an example of what NOT to watch

Dr Dimitri Christakis is a researcher who kept baby mice in a cartoon-like environment to explore the long-term effects.

The mice were divided into two groups, one in a normal environment and one in which the mice were overstimulated.

After the first 10 days of their lives, the overstimulated mice’s cartons were bombarded with audio from fast-paced cartoons and flashing lights that were in rhythm with the audio for six hours a day for 42 days.

During the behavioural testing phase, the researchers compared the physical activity of the two groups by tracking their movements in a large open area.

Normal mice typically rarely venture into large open spaces in order to protect themselves from the prying eyes of possible predators.

In contrast, the overstimulated mice lacked self-control. They were hyperactive as you can see on the image below and ended up spending a large percentage of their time in the dangerous middle zone.

The researchers tested the mice’s ability to learn new things by placing objects in the cartons that were unfamiliar to them.

The normal group reacted with interest and were curious to explore new objects. The overstimulated group, on the other hand, didn’t even notice that something in their environment had changed!

In another experiment, Dr Christakis also explored the short-term effects of fast-paced cartoons on 4-year-old children.
Three groups of children alternatively drew pictures for 9 minutes, watched conversational educational television for 9 minutes, or watched Spongebob Squarepants for 9 minutes. They played a series of games afterwards that aimed to assess whether they were able to adapt to changing demands, keep information in mind just long enough to work with it, solve problems and exert self-control.

The results showed that the children who had watched Spongebob were so negatively impacted by the experience that they weren’t able to master any of the 4 games.

In other words, after watching 9 minutes of fast-paced cartoons, one can expect a typical 4 year old to be less successful with tasks requiring any of the following skills: adaptability, working memory, problem-solving skills or self-control.

Choose shows for toddlers that are gentle, dreamy and “magical”.

Ideally, events should unfold slowly with gentle musical accompaniment so that parents can easily add their own personalized running commentary as they watch with their child. 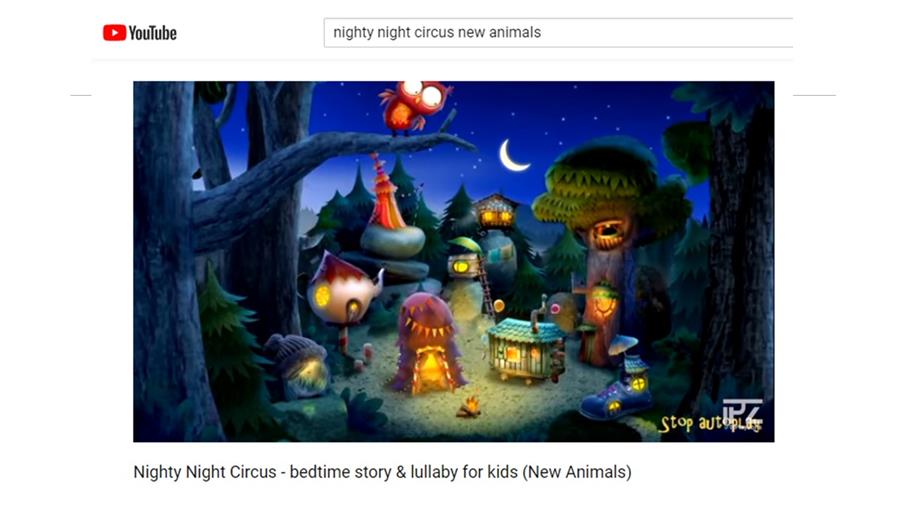 To recap, bear the following pointers in mind:

No screens for children younger than 18 months. And, while your child is 18-24 months old, try to limit screen time to 15 minutes a day.

At all ages, repeat selected songs and shows instead of watching something different every day. Repetition makes it possible for a child to progressively learn to predict the storyline, recognise concepts and learn new words.

Watch with your child and give a running commentary to help him make sense of what is happening on the screen.

Bear in mind that your little one needs to focus on the screen and listen to you at the same time, so speak gently, use a calm tone of voice, be sensitive and not overbearing. 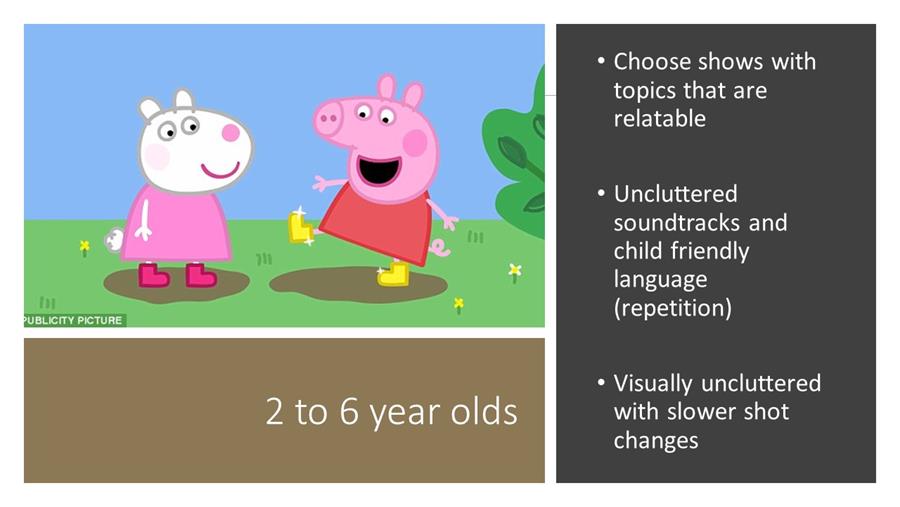